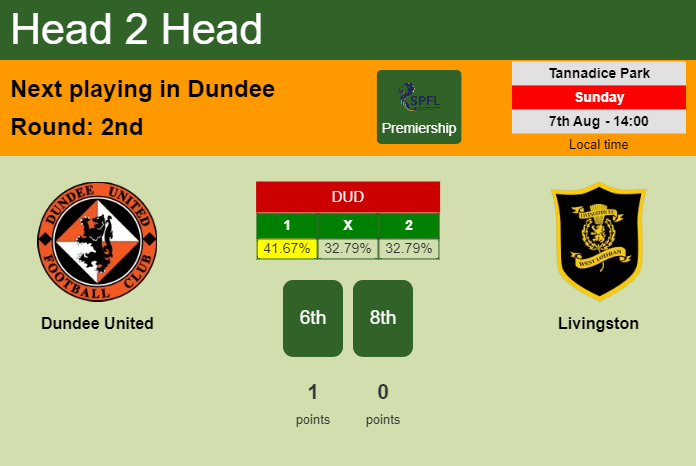 Dundee United and Livingston will face off in the 2nd week of the 2022/2023 Premiership on Sunday the 7th of August at 3:00 pm at Tannadice Park in Dundee (click here to see your time). In the following paragraphs you can find the head to head analysis and prediction.

OVER 2.5. The forecast is that the match will end with 3 goals or more. As of now the combined matches of Dundee United and Livingston ended once with 2 goals or less and once with more than 2 goals​.

The referee to officiate this match will be Steven McLean who has already officiated 1 match in Premiership this season​.He has never officiated a match for any of the 2 teams this season​.

Dundee United has 1 points to occupy the 6th place in the Premiership. Dundee United won 0 matches, it has never lost up to now, and drew once.

Last season, Dundee United has scored 6 goals in total. It is inclined to to score later in the match. 14 goals were scored in the first half (37.84%), 23 goals in the second (62.16%). Dundee United has a negative goal difference (-1) after scoring 6 goals and conceding 7 goals.

The leading scorer is N.Clark who has scored 5 goals in 30 matches. He has scored 1 penalty.

Livingston has 0 points and is in the 8th place in the Premiership. Livingston won 0 matches, lost once, and never draw thus far.

Last season, Livingston has scored 6 goals in total. It has an inclination to score later in the match. 19 goals were scored in the first half (46.34%), 22 goals in the second (53.66%). Livingston has a positive goal difference (+3) after scoring 6 goals and conceding 3 goals.

The top scorer is B.Anderson who has scored 10 goals in 30 matches. He hasn’t scored any goal on a penalty.