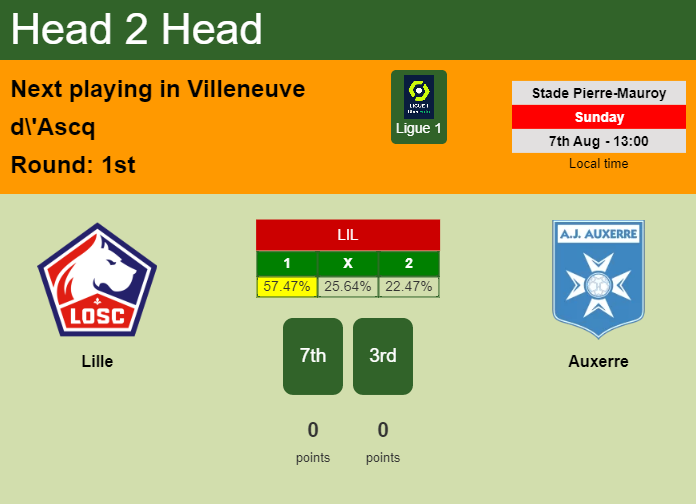 Lille and Auxerre will face in the 1st week of the 2022/2023 Ligue 1 on Sunday the 7th of August at 3:00 pm at Stade Pierre-Mauroy in Villeneuve d’Ascq (click here to see your time). In the following paragraphs you can find the head to head analysis and prediction.

The prediction is that Lille will prevail. According to our analysis, there are 57.47% chances that Lille prevails. The probability of a draw is 25.64%.

The referee who will officiate this match is Eric Wattellier who has already officiated 1 match in Ligue 1 this season​.He has never officiated a match for any of the 2 teams this season​.

Lille has 0 points to occupy the 7th place in the Ligue 1. Lille won 0 matches, it has never lost so far, and never drew until now.

Paulo Alexandre Rodrigues Fonseca will not be able to rely on G. Gudmundsson and T. Weah who are both suspended​.

The leading scorer is J.David who has scored 12 goals in 28 matches. He hasn’t scored any goal on a penalty.

Auxerre has 0 points and occupies the 3rd place in the Ligue 1. Auxerre won 0 matches, it has never lost until now, and never draw until now.