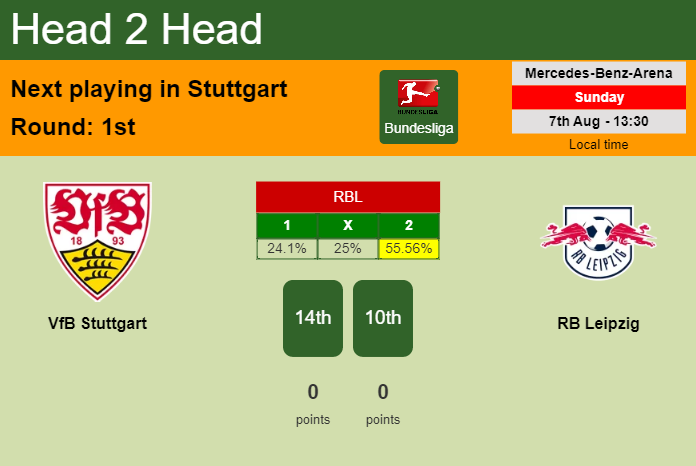 VfB Stuttgart and RB Leipzig will clash in the 1st week of the 2022/2023 Bundesliga on Sunday the 7th of August at 3:30 pm at Mercedes-Benz-Arena in Stuttgart (click here to see your time). In the following paragraphs you can find the head to head analysis and prediction.

VfB Stuttgart has accumulated 0 points and it is in the 14th place in the Bundesliga. VfB Stuttgart won 0 matches, it has never lost so far, and never drew until now.

Pellegrino Matarazzo will not be able to rely on W. Anton who is suspended​.

The top scorer is K.Mavropanos who has scored 4 goals in 23 matches. He hasn’t scored any goal on a penalty.

RB Leipzig has accumulated 0 points and is in the 10th position in the Bundesliga. RB Leipzig won 0 matches, it has never lost until now, and never draw until now.

The best scorer is C.Nkunku who has scored 15 goals in 26 matches. He scored 3 penalties.