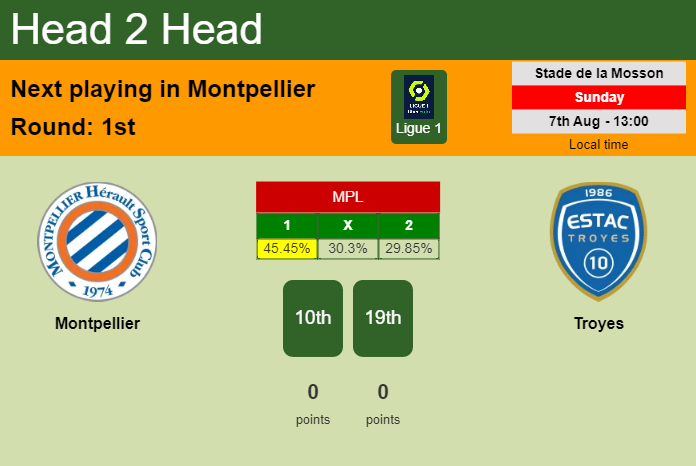 Montpellier and Troyes are going to play in the 1st week of the 2022/2023 Ligue 1 on Sunday the 7th of August at 3:00 pm at Stade de la Mosson in Montpellier (click here to see your time). In the following paragraphs you can find the head to head analysis and prediction.

The referee to officiate this match will be Pierre Gaillouste who has already officiated 1 match in Ligue 1 this season​.He has never officiated a match for any of the 2 teams this season​.

Montpellier has accumulated 0 points and it is in the 10th place in the Ligue 1. Montpellier won 0 matches, it has never lost thus far, and never drew until now.

Olivier Dall’Oglio will not be able to rely on J. Ferri who is suspended​.

The top scorer is S.Mavididi who has scored 8 goals in 22 matches. He hasn’t scored any goal on a penalty.

Montpellier lost the last 3 matches. The last time it won a match it was agaisnt Bordeaux on the 20th of March and the result was 2-0.

Troyes has 0 points and occupies the 19th position in the Ligue 1. Troyes won 0 matches, it has never lost thus far, and never draw until now.

Bruno Irles will not be able to have the presence of I. Kabore who is suspended​​.

The best scorer is X.Chavalerin who has scored 5 goals in 24 matches. He hasn’t scored any goal on a penalty.