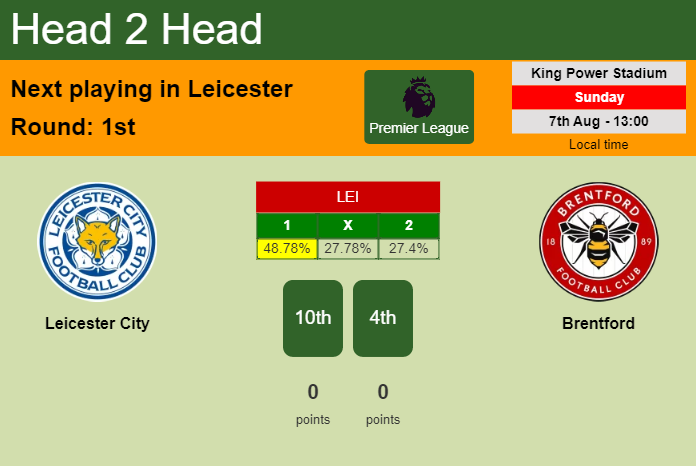 Leicester City and Brentford will take on in the 1st week of the 2022/2023 Premier League on Sunday the 7th of August at 2:00 pm at King Power Stadium in Leicester (click here to see your time). In the following paragraphs you can find the head to head analysis and prediction.

Leicester City has accumulated 0 points and it is in the 10th position in the Premier League. Leicester City won 0 matches, it has never lost so far, and never drew until now.

The leading scorer is J.Vardy who has scored 10 goals in 20 matches. He hasn’t scored any goal on a penalty.

Brentford has 0 points and occupies the 4th position in the Premier League. Brentford won 0 matches, it has never lost up to now, and never draw thus far.

Thomas Frank will not be able to have the presence of S. Canós Tenes who is suspended​​.

The top scorer of the team is I.Toney who has scored 11 goals in 24 matches. He scored 3 penalties.