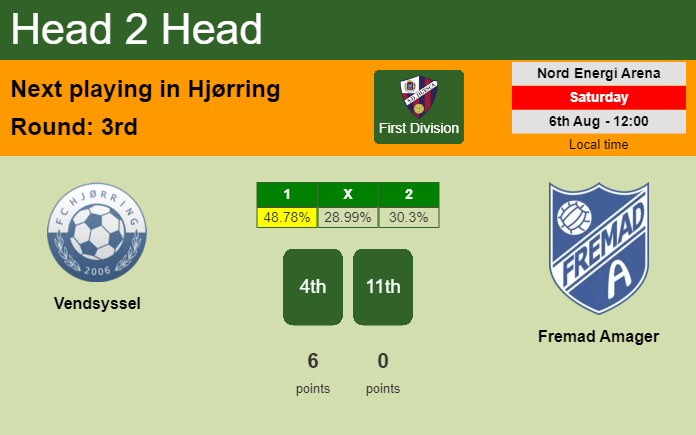 Vendsyssel and Fremad Amager will face off in the 3rd week of the 2022/2023 First Division on Saturday the 6th of August at 2:00 pm at Nord Energi Arena in Hjørring (click here to see your time). In the following paragraphs you can find the head to head analysis and prediction.

OVER 2.5. The forecast is that the match will end with 3 goals or more. As of now the combined matches of Vendsyssel and Fremad Amager ended 4 times with more than 2 goals. They have never competed in a match that ended with 2 goals or less.​

In the course of this competition, Vendsyssel took part in 2 matches that ended with both teams scoring more than 2 goals in total (OVER 2.5 -> 100.0%).​

When playing home, Vendsyssel participated in 1 match that finished with the teams scoring more than 2 goals in total (OVER 2.5 -> 100.0%).​

The referee who will officiate this match is Chris Johansen who has already officiated 2 matches in First Division this season​.He has never officiated a match for any of the 2 teams this season​.

Vendsyssel has 6 points and it is in the 4th position in the First Division. Vendsyssel won 2 matches, it has never lost so far, and never drew up to now.

The top scorer is T.Konaté who has scored 7 goals in 26 matches. He hasn’t scored any goal on a penalty.

Fremad Amager has 0 points and is in the 11th place in the First Division. Fremad Amager won 0 matches, lost twice, and never draw until now.

The top scorer is K.Munksgaard who has scored 6 goals in 19 matches. He hasn’t scored any goal on a penalty.