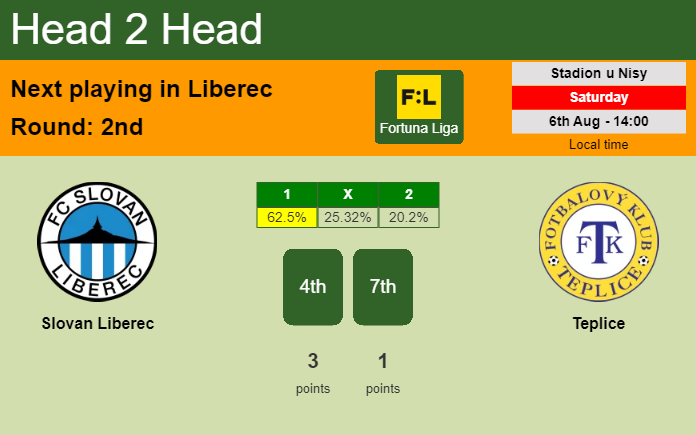 Slovan Liberec and Teplice will face in the 2nd week of the 2022/2023 Fortuna Liga on Saturday the 6th of August at 4:00 pm at Stadion u Nisy in Liberec (click here to see your time). In the following paragraphs you can find the head to head analysis and prediction.

OVER 2.5. The forecast is that the match will end with 3 goals or more. As of now the combined matches of Slovan Liberec and Teplice ended 2 times with more than 2 goals. They have never competed in a match that ended with 2 goals or less.​

Slovan Liberec has 3 points to occupy the 4th place in the Fortuna Liga. Slovan Liberec won 1 match, it has never lost up to now, and never drew up to now.

The leading scorer is M.Rabušic who has scored 5 goals in 24 matches. He hasn’t scored any goal on a penalty.

Slovan Liberec lost the last 3 matches. The last time it won a match it was agaisnt Karviná on the 17th of April and the outcome was 2-1.

Teplice has 1 points and occupies the 7th place in the Fortuna Liga. Teplice won 0 matches, it has never lost thus far, and drew once.

The players who have scored most goals are J.Mareš and J.Fortelný with 4 goals.