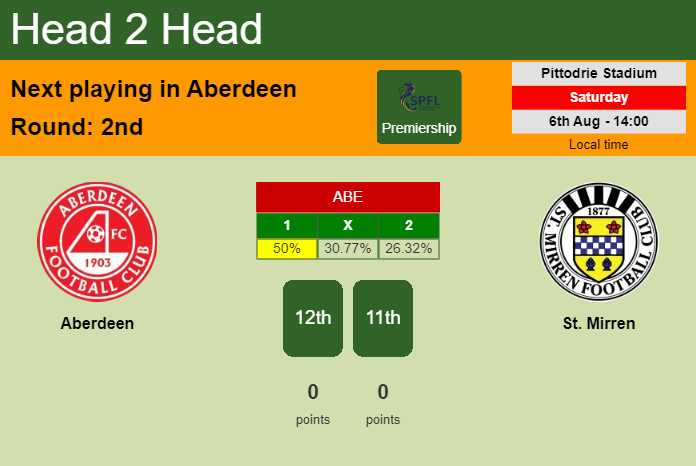 Aberdeen and St. Mirren are going to face in the 2nd week of the 2022/2023 Premiership on Saturday the 6th of August at 3:00 pm at Pittodrie Stadium in Aberdeen (click here to see your time). In the following paragraphs you can find the head to head analysis and prediction.

The prediction is that Aberdeen will prevail. As per our analysis, there are 50% chances that Aberdeen prevails. The probability of a draw is 30.77%.

OVER 2.5. The forecast is that the match will end with 3 goals or more. As of now the combined matches of Aberdeen and St. Mirren ended 2 times with 2 goals or less. They have never competed in a match that ended with more than 2 goals.​

The referee who will officiate this match is Alan James Muir who has already officiated 1 match in Premiership this season​.He has never officiated a match for any of the 2 teams this season​.

Aberdeen has accumulated 0 points to be in the 12th position in the Premiership. Aberdeen won 0 matches, lost once, and never drew thus far.

Last season, Aberdeen has scored 3 goals in total. It has an inclination to score later in the match. 16 goals were scored in the first half (39.02%), 25 goals in the second (60.98%). Aberdeen has a negative goal difference (-1) after scoring 3 goals and conceding 4 goals.

The top scorer is C.Ramirez who has scored 9 goals in 30 matches. He hasn’t scored any goal on a penalty.

St. Mirren has 0 points and is in the 11th position in the Premiership. St. Mirren won 0 matches, lost once, and never draw thus far.

The best scorer of the team is C.Ronan who has scored 7 goals in 22 matches. He hasn’t scored any goal on a penalty.