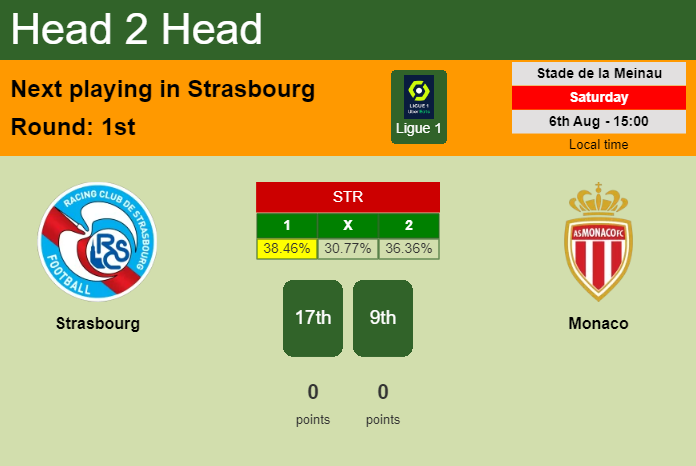 Strasbourg and Monaco are going to clash in the 1st week of the 2022/2023 Ligue 1 on Saturday the 6th of August at 5:00 pm at Stade de la Meinau in Strasbourg (click here to see your time). In the following paragraphs you can find the head to head analysis and prediction.

The designated referee is François Letexier who has already officiated 1 match in Ligue 1 this season​.He has never officiated a match for any of the 2 teams this season​.

Strasbourg has accumulated 0 points and it is in the 17th place in the Ligue 1. Strasbourg won 0 matches, it has never lost to date, and never drew thus far.

The top scorer is L.Ajorque who has scored 10 goals in 26 matches. He has scored 1 penalty.

Monaco has accumulated 0 points and is in the 9th place in the Ligue 1. Monaco won 0 matches, it has never lost thus far, and never draw thus far.

Philippe Clement will not be able to have the presence of A. Golovin and K. Volland who are both suspended​​.

The best scorer is W.Ben Yedder who has scored 15 goals in 27 matches. He scored 1 penalty.