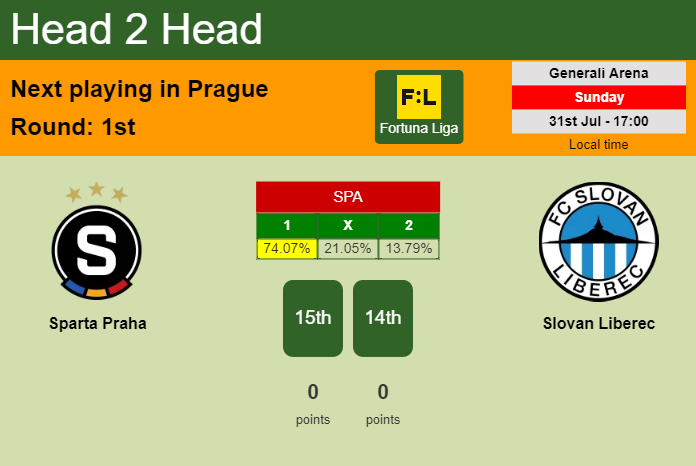 Sparta Praha and Slovan Liberec are going to play in the 1st week of the 2022/2023 Fortuna Liga on Sunday the 31st of July at 7:00 pm at Generali Arena in Prague (click here to see your time). In the following paragraphs you can find the head to head analysis and prediction.

Sparta Praha has accumulated 0 points to be in the 15th position in the Fortuna Liga. Sparta Praha won 0 matches, it has never lost up to now, and never drew thus far.

The top scorer is J.Pešek who has scored 10 goals in 26 matches. He hasn’t scored any goal on a penalty.

Slovan Liberec has 0 points and occupies the 14th place in the Fortuna Liga. Slovan Liberec won 0 matches, it has never lost so far, and never draw up to now.

The best scorer is M.Rabušic who has scored 5 goals in 24 matches. He hasn’t scored any goal on a penalty.

Slovan Liberec lost the last 3 matches. The last time it won a match it was against Karviná on the 17th of April and the scoreline was 2-1.