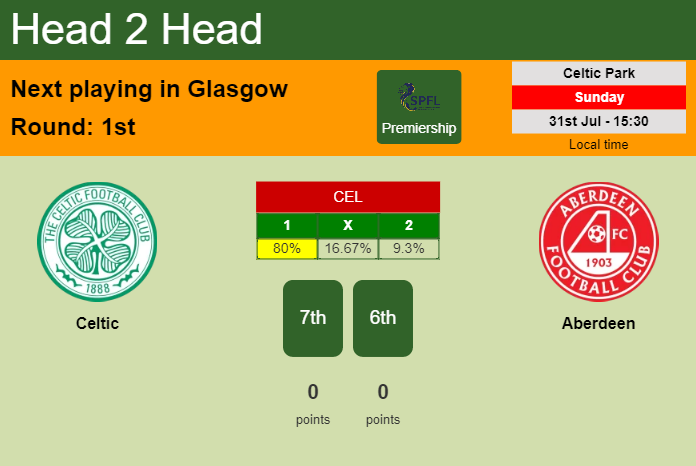 Celtic and Aberdeen are going to clash in the 1st week of the 2022/2023 Premiership on Sunday the 31st of July at 4:30 pm at Celtic Park in Glasgow (click here to see your time). In the following paragraphs you can find the head to head analysis and prediction.

The prediction is that Celtic will win the contest. In conformity with our forecast, there are 80% chances that Celtic prevails. The probability of a draw is 16.67%.

Celtic has 0 points to be in the 7th position in the Premiership. Celtic won 0 matches, it has never lost thus far, and never drew thus far.

The leading scorer is L.Abada who has scored 9 goals in 30 matches. He has scored 1 penalty.

Aberdeen has accumulated 0 points and is in the 6th position in the Premiership. Aberdeen won 0 matches, it has never lost until now, and never draw to date.

The top scorer is C.Ramirez who has scored 9 goals in 30 matches. He hasn’t scored any goal on a penalty.