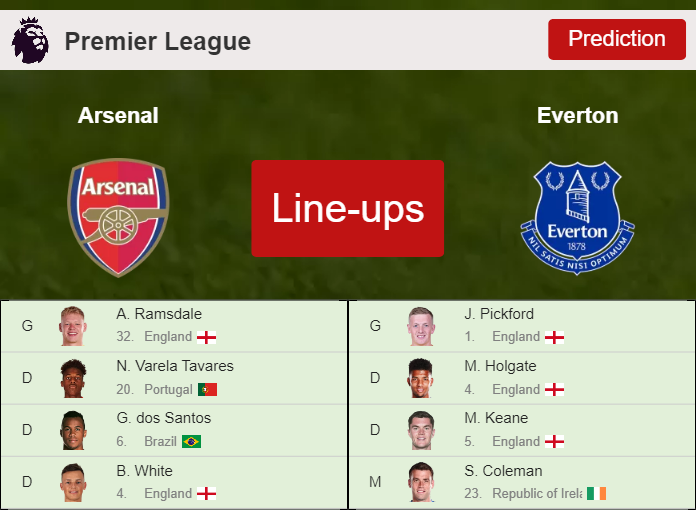 Arsenal and Everton are going to play on Sunday the 22nd of May at 4:00 pm in the 38th week of the Premier League. The match is going to take place in London at the Emirates Stadium. The chosen referee is Andre Marriner.

Arsenal sits in the 5th place in the table with 66 points. It comes from a 2-0 loss against Newcastle United in its last match in the Premier League. To date, it has won 21 times, draw 3 times, and lost 13 times.​​

Everton is in the 16th place in the league with 39 points. It comes from a 3-2 win against Crystal Palace in its last match in the Premier League. Thus far, it has won 10 times, draw 6 times, and lost 20 times.​​

Granting that the above line up is confirmed, the average age of Arsenal would be 25.09.

Mikel Arteta Amatriain will probably not be able to employ T. Tomiyasu and T. Partey because of injury.

Mikel Arteta Amatriain will not be able to have the presence of R. Holding who is suspended​.

Granting that the line up is confirmed as above, the resulting average age of Everton would be 26.60.

Frank Lampard will probably not be able to employ Y. Mina González and F. Delph because of injury.

T. Davies, N. Patterson and A. Townsend will definitely miss the match.

Frank Lampard will not be able to have the presence of J. Branthwaite and J. Rondón Giménez who are both suspended​​.