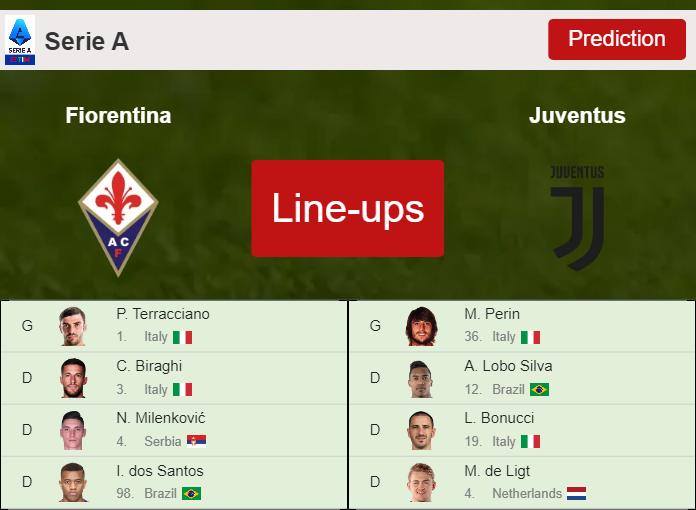 Fiorentina and Juventus are going to take on on Saturday the 21st of May at 8:45 pm in the 38th week of the Serie A. The match is going to take place in Firenze at the Stadio Artemio Franchi. The appointed referee is Daniele Chiffi.

Fiorentina is in the 8th place in the standings with 59 points. It comes from a 4-1 loss against Sampdoria in its last match in the Serie A. To date, it has won 18 times, draw 5 times, and lost 14 times.​​

Juventus occupies the 4th place in the league with 70 points. It comes from a 2-2 draw against Lazio in its last match in the Serie A. Up to now, it has won 20 times, draw 10 times, and lost 7 times.​​

Granting that the above line up is confirmed, the resulting average age of Fiorentina would be 26.91.

Vincenzo Italiano will probably not be able to employ R. Sottil because of injury.

Vincenzo Italiano will not be able to have the presence of Y. Maleh who is suspended​.

Assuming that the line up is confirmed, the average age of Juventus would be 28.27.

Massimiliano Allegri will probably not be able to employ A. Hajdari, M. De Sciglio and W. McKennie because of injury.