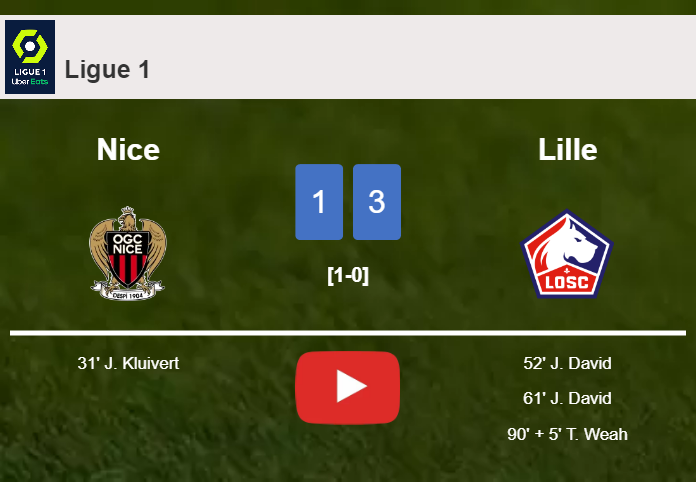 NICE. Lille succeeded in reverse the score against Nice. It was Nice to score first with a goal from J. Kluivert. Notwithstanding, later Lille found the way to reverse the score scoring 3 consecutive goals with J. David (52′), J. David (61′) and T. Weah (90′). Nice lost this match even if it was superior in terms of ball possession (59%).

The match was played at the Allianz Riviera stadium in Nice. The referee was Thomas Léonard assisted by Gilles Lang and Aurélien Berthomieu. The 4th official was Remi Landry. The weather was cloudy. The temperature was cold at 8.9 degrees Celsius or 47.98 Fahrenheit. The humidity was 94%.​

Nice had a more offensive attitude with 39 dangerous attacks and 14 shots of which 5 were on target. Nonetheless, Lille was able to find the solution to win this match.​

After playing this encounter, Nice will stay with 63 points like Strasbourg to remain in the 6th place. On the other side, Lille will have 54 points like Nantes to sit in the 10th place.

In the next match in the Ligue 1, Nice will play away against Reims on the 21st of May with a 5-3 head to head stats in favor of Nice (8 draws).

The manager Christophe Galtier decided to play with the following team: .