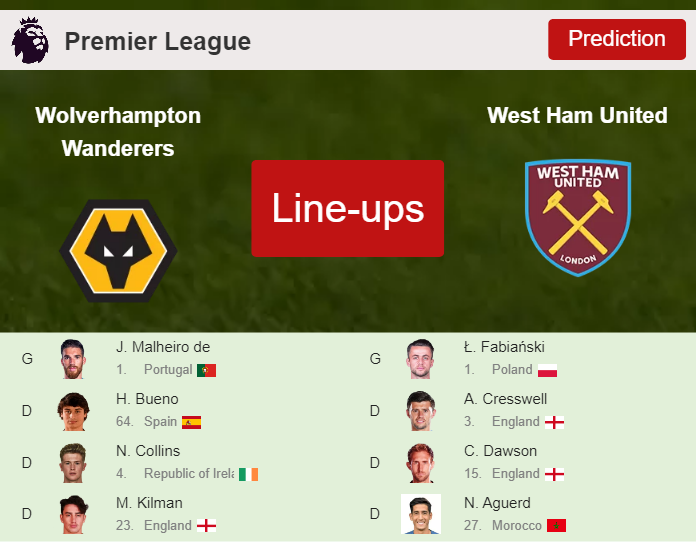 Wolverhampton Wanderers and West Ham United will take on on Saturday the 14th of January at 3:00 pm in the 20th week of the Premier League. The match will take place in Wolverhampton at the Molineux Stadium. The encounter will be officiated by Simon Hooper.

Wolverhampton Wanderers sits in the 19th place in the league with 14 points. It comes from a 1-1 draw against Aston Villa in its last match in the Premier League. Thus far, it has won 3 times, draw 5 times, and lost 10 times.​​

West Ham United is in the 17th position in the standings with 15 points. It comes from a 2-2 draw against Leeds United in its last match in the Premier League. So far, it has won 4 times, draw 3 times, and lost 11 times.​​

Assuming that this will be the line-up, the projected average age of Wolverhampton Wanderers would be 28.30.

Julen Lopetegui Argote will probably not be able to employ D. da Silva Costa because of injury.

Granting that this will be the line-up, the average age of West Ham United would be 29.44.

There are doubts about the presence of V. Coufal and G. Scamacca.

David Moyes will probably not be able to employ A. Areola because of injury.

K. Zouma and G. Cornet will definitely miss the match.