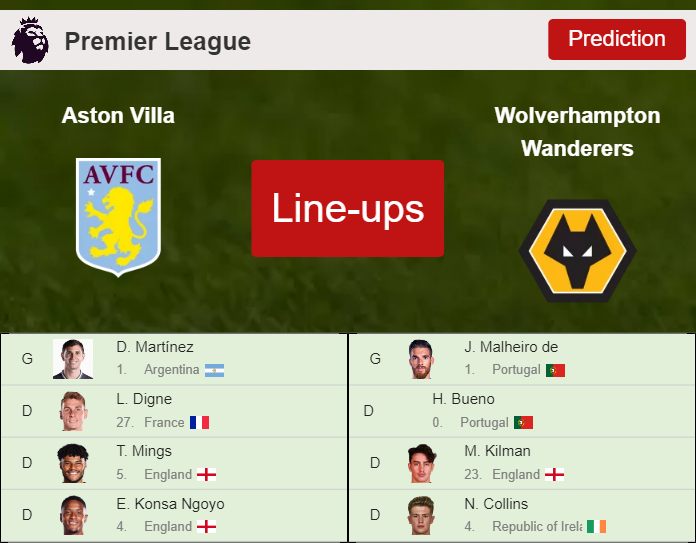 Aston Villa and Wolverhampton Wanderers will play on Wednesday the 4th of January at 8:00 pm in the 19th week of the Premier League. The match is going to be staged in Birmingham at the Villa Park. The referee will be Jarred Gillett.

Aston Villa is in the 12th place in the table with 21 points. It comes from a 0-2 win against Tottenham Hotspur in its last match in the Premier League. Thus far, it has won 6 times, draw 3 times, and lost 8 times.​​

Wolverhampton Wanderers occupies the 19th position in the standings with 13 points. It comes from a 0-1 loss against Manchester United in its last match in the Premier League. Up to now, it has won 3 times, draw 4 times, and lost 10 times.​​

Presuming that this will be the line-up, the estimate average age of Aston Villa would be 27.80.

There are doubts about the presence of D. Soares de Paulo.

Unai Emery Etxegoien will probably not be able to employ J. Ramsey and J. McGinn because of injury.

In case that the line up is confirmed as above, the estimate average age of Wolverhampton Wanderers would be 28.60.