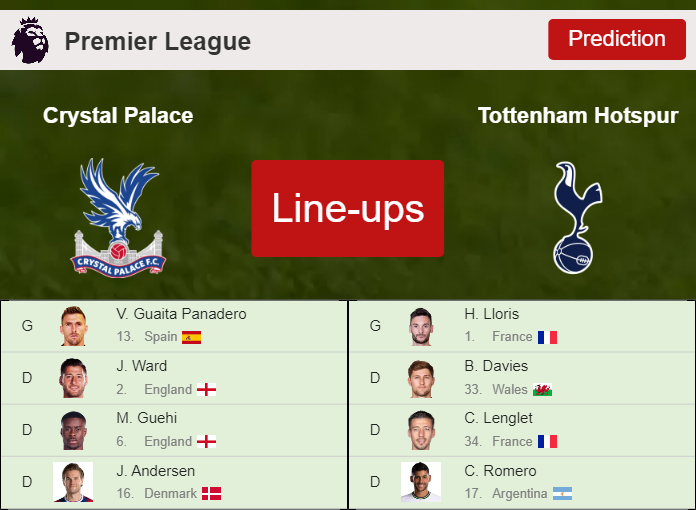 Crystal Palace and Tottenham Hotspur will play on Wednesday the 4th of January at 8:00 pm in the 19th week of the Premier League. The match is going to be staged in London at the Selhurst Park. The appointed referee is Michael Oliver.

Crystal Palace occupies the 11th position in the league with 22 points. It comes from a 0-2 win against AFC Bournemouth in its last match in the Premier League. So far, it has won 6 times, draw 4 times, and lost 6 times.​​

Tottenham Hotspur is in the 5th place in the standings with 30 points. It comes from a 0-2 loss against Aston Villa in its last match in the Premier League. Until now, it has won 9 times, draw 3 times, and lost 5 times.​​

Granting that the above line up is confirmed, the projected average age of Crystal Palace would be 28.73.

N. Ferguson and J. McArthur will definitely miss the match.

Patrick Vieira will not be able to have the presence of T. Mitchell who is suspended​.

In case that the line up is confirmed, the estimate average age of Tottenham Hotspur would be 28.36.

Antonio Conte will probably not be able to employ D. Kulusevski because of injury.

Antonio Conte will not be able to have the presence of Y. Bissouma who is suspended​​.