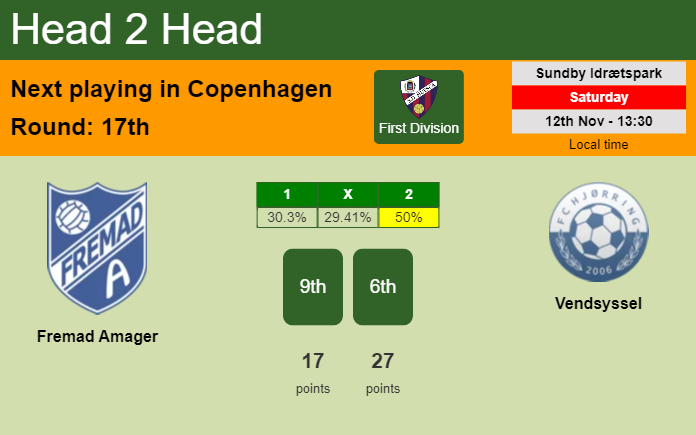 Fremad Amager and Vendsyssel are going to face in the 17th week of the 2022/2023 First Division on Saturday the 12th of November at 2:30 pm at Sundby Idrætspark in Copenhagen (click here to see your time). In the following paragraphs you can find the head to head analysis and prediction.

OVER 2.5. The forecast is that the match will end with 3 goals or more. As of now the combined matches of Fremad Amager and Vendsyssel ended 12 times with 2 goals or less and 20 times with more than 2 goals​.

The leading scorer is H.Meister who has scored 3 goals in 9 matches. He hasn’t scored any goal on a penalty.

Fremad Amager is on a 4 matches winning streak. It still has to lose a match during this season.

Vendsyssel has 27 points and occupies the 6th position in the First Division. Vendsyssel won 8 matches, lost 5 times, and drew 3 times.

The best scorer of the team is W.Abou Ali who has scored 7 goals in 14 matches. He hasn’t scored any goal on a penalty.